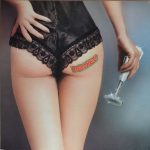 Damien were a four piece Heavy Metal/Hard Rock band formed by former RICOCHET bassist Neil “The Finn” Finnegan, who had opted to stay behind in Germany after the NWoBHM band toured there in 1980. Settling in Frankfurt, he set about forming a new act, recruiting two other ex-pat Brits, vocalist John Cadden and Guitarist Tony Clark, and German Drummer “Tiny” Rudy Matthies.

The band set about gigging locally and writing and rehearsing the songs which they recorded for their 1982 demo tape. A second demo was then circulated in 1983, and this one grabbed the attention of several record companies. Securing a four year deal with Steamhammer Records in 1984, the band opted to debut with a Mini LP to be recorded with producer Wolfgang Eicholz at Recordland Studios in Berlin. However, before the recordings took place, vocalist John Cadden decided to leave the band and was replaced by former Demolition man, Mark Wederell.

Wederell and guitarist Tony Clark had known each other for years and had previously played together in Savage.
The five song “Damien” Mini LP (also known as “Words”), was released later in ’84, and was greeted with some enthusiasm by press and fans alike. Clark was the outstanding force on the Mini LP, showing off all over the place with some outstanding lead work.

Contemporary reviews saw him compared favourably with then Ozzy Osbourne axe man Jake E. Lee. The band built up a considerable reputation as a live act during this time, and completed the tour in support of the record in style, appearing before a huge crowd at the “Rhein-Main In Concert” Festival.

Mark Wederell was then replaced by former Detroit singer, Andy Pyke (who had provided backing vocals on the Mini LP), during preparations for the recording of a full length album, due to be called “Cold Fingers“. Wererell went on to join the Swiss Metal band, Maniac, after his stint in Damien, appearing on their self-titled 1985 LP on Hot Blooded Records.
Unfortunately, despite the Damien album being announced and advertised in the press, the recordings were never to be released.Damien’s record deal was terminated, as sales hadn’t matched the label’s expectations, and in disarray, the band called it quits.

During 2000, a collection of Damien rarities looked set to surface on the Heavy Rock Records label. “The Story Of Damien“, was set to include rare demos alongside live material featuring Pyke, but sadly that release didn’t ultimately materialise either.

Post-Damien, Vocalist Andy Pyke succeeded Marco Paganini in German Hard band VIVA, but eventually returned to the UK in 1986 when this new Viva line-up failed to gel. He then joined Marshall Law, fronting that band from 1987-1992 and recording 2 albums, an EP and a demo with them during this time. Marshall Law split in 1992, before again reconvening in 1995, with Pyke reinstated in the vocalist’s role. A live record was followed by three further studio albums before Pyke announced his departure from the band’s ranks in 2010. Pyke also found time in 1997 to provide backing vocals on “Victim Of Changes“, the fourth solo album by former Judas Priest vocalist, Al Atkins.

Drummer “Tiny” Rudy Matthies, found himself playing with original Damien vocalist John Cadden once again, when they both joined the Franfurt band named Vandal in 1986. Damien bassist “The Finn” rejoined his former Ricochet band mates for 2 weeks in 2000 and re-recorded their NWoBHM classic “Midas Light” in a Coventry studio, together with some other tracks.

These tracks along with vintage version were made available on CD through the Ricochet website, as the six song “Midas Light” mini-album. The band members then went their separate ways again.

In 2005 “The Finn” was managing a music festival in Northampton, and with his former band-mates available, Ricochet returned to the stage playing a three song set comprising “Midas Light“, “Dreadnought” and “Off The Rails“.
In 2010, the Ricochet band members found themselves all living once more around Birmingham, for the first time in 30 years. After meeting up for a beer, it transpired that they all missed the Ricochet times and decided to give it one more throw of the dice.