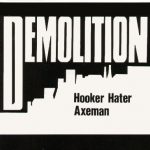 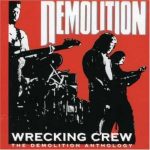 Apart from Demolition, I can’t think of any other band featuring a bass player headbanging with his turban on stage. Gurmeet Singh Panesar, to his mates Lita Panesar, was of Indian descent. However, to legions of N.W.O.B.H.M. aficionados around the world the band from the suburbs of Birmingham is known first and foremost for their excellent 7″ single “Hooker Hater” (B-Side “Axeman”), which is considered one of the top rarities of the genre. Both songs do possess a strong Motörhead feel and belong to the rough ’n’ ready school of the N.W.O.B.H.M. (led by acts like Raven, Jaguar and Mythra). The band was formed in 1979, originally as Demolition Gang, by vocalist John Cadden. They played numerous gigs at venues like the Barrel Organ, The Railway, Romeo & Juliet’s and the Mercat Cross, gaining a healthy following among local bikers. Songs like the outstanding “On Top of the World”, “My Direction” or “Down in Hell”, the band’s answer to Lemmy’s “Ace of Spades”, always make me wonder what would have happened, if Demolition had recorded a full-length album in 1981? They could have been huge …

However, this was not to be. John Cadden and his boys were just out to have a good time, never actively approaching the record company A&R’s down in London. Nevertheless, they decided to record and finance a single on their own in order to have some product out in time for their German tour which started on Friday, 16th of October 1981. The tour had been organized by a certain Finn, a close friend of John Cadden and former member of fellow Brum band Ricochet. Demolition played some very obscure clubs in Frankfurt, Darmstadt, Heidelberg, Erlensee, Hannover and Bremerhaven (never making it to Hamburg or Berlin) in front of bemused mainstream rock audiences. However, they had a blast and returned back home bursting with renewed energy. You can witness for yourself listening to the 12 live songs on the “Wrecking Crew” album (recorded at the Boars Head in Kidderminster in 1981). The recording features all of 0:24 seconds of UFO’s classic “Rock Bottom”, showing that Demolition did have a sense of humor (unlike some of their colleagues). When still named Demolition Gang, another UFO track, the immortal “Too hot too handle”, completed the band’s set (of around eight numbers all in all).

The band did not last long into 1982 as vocalist John Cadden decided to quit Demolition as he was to leave England. Bassist Lita Panesar would not carry on without him. Cadden moved to Germany and sung for Metal bands as diverse as Damien and Thrash legends Exumer (not appearing on any record though as far as I know). In October 2005, he wrote the liner notes for the “Wrecking Crew” album in Kandahar, Afghanistan.